Dave Mosher is a multimedia communications professional who's obsessed with science, technology, and the future
About Portfolio
about
Dave Mosher is a science and technology media professional with more than 15 years of experience reporting, writing, editing, shooting, and producing story-driven content about space, physics, engineering, energy, biology, and absurdly ambitious human endeavors.

Mosher works on the communications team for AST SpaceMobile, which aims to help close a glaring digital divide faced by half of humanity: lack of mobile broadband internet access. The public company (listed on Nasdaq as ASTS) aims to build a fleet of spacecraft that would provide the first direct-to-smartphone broadband connectivity from space — no other hardware or software required — through existing cellular providers. The network AST is building is designed to connect hundreds of millions of devices around the world, help ease poverty, support economic development, build a more equitable and diverse digital society, and save lives.

Prior to joining the satellite and communications industry startup, Mosher was a journalist and senior correspondent at Insider Inc. His reporting took a conversational approach to often exceedingly complex topics using text, photography, data, interactive graphics, video, and other formats for the news sites Insider and Business Insider.

Mosher has watched humans, robots, and a car launch into space, flown over the North Pole to catch a total solar eclipse, toured cutting-edge (and defunct) nuclear reactors, and donated his fecal bacteria in the name of science, among other reporting adventures.

He lives in the NYC metro area with his part-human, part-canine family. 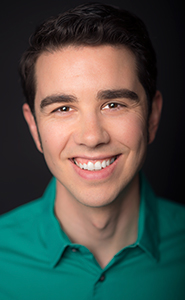 EXPLORE A PORTFOLIO ITEM BY CLICKING ON A TILE

He’s also moderated a sci-fi movie premiere, led a public discussion with NASA about eating (and passing) food in space, shared a stage with Bill Nye, explained the science of flight while people pushed homebuilt aircraft off a 30-foot ledge, hosted popular shows on YouTube, and more.